Colorado’s climate is located mostly within the cool northern half of the US, where fall, winter, and spring temperatures are on the cold side. This means a seasonal rotation between warm and cool season grasses is the only way to get green cover in your yard year-round.

What Is The Easiest Grass Seed To Grow In Colorado?

Certain lawn grasses do better than others in the seasonal and dry Colorado climate, and your location within the state will have some effect on your available choices. The variables you’ll need to consider include: 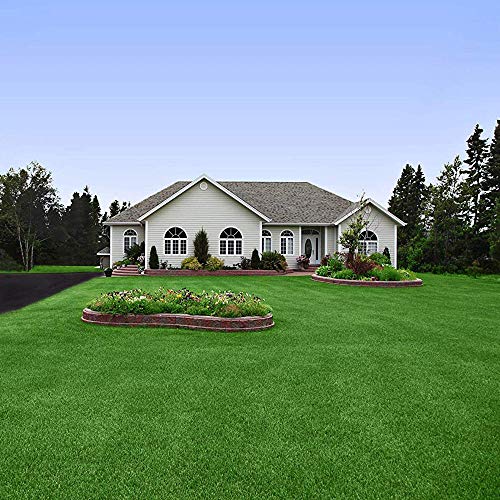 Colorado summers are warm to hot and generally dry. Luckily, a range of drought-tolerant grasses are available for spring through summer, including a couple of native options. The easiest grasses to grow during summer in Colorado are:

Buffalo grass is one of the best options for your Colorado lawn in the warmer months of the year. It’s native to the state and is adept to the dry, bright Colorado climate. This grass has deep roots and spreads by above-ground root extensions (stolons), which creates a dense cover and drought tolerance that allows it to go up to two weeks without moisture. It prefers dry conditions and will do well in its native clay soils that other grasses may have difficulty penetrating.

As a sun-loving grass, buffalo won’t grow in shade, but it likes to be kept on the longer side so it can protect itself from the sun. This means that buffalo grass can’t be cut too short, and isn’t ideal for areas with heavy foot traffic.

Like buffalo grass, blue grama grass is a Great Plains native that can be planted as a warm-season lawn. Its often planted with buffalo grass because blue grama is a bunch-type grass that doesn’t spread by extensions but grows in individual bunches from individual seeds.

Buffalo will fill in any spaces not covered by the blue grama to create a tight cover. Like buffalo grass, blue grama loves full sun and longer grass blades. It’s considered a “no mow” grass that you can grow and only cut at the end or beginning of the growing season.

As a prairie grass, it has a very high drought tolerance and low irrigation requirements. In general, blue grama is a low maintenance grass that’s perfect for summers across the state.

Bermuda is a popular choice for a summer turf grass that can be cut short, take some heavy foot traffic, and repair itself when damaged. This is another grass that likes to be planted in full sun, making Bermuda a good choice for sports fields and yards that get used frequently.

Bermuda needs to be watered much more frequently than buffalo or blue grama, but its dense root system of rhizomes and stolons (below- and above-ground root extensions) gives it considerable drought tolerance. Bermuda grass’ dense roots also make this grass able to work through the clay soils throughout the state, whether in the desert, the mountains, or the plains.

Zoysia is an option for partially shaded areas that other warm-season grasses won’t grow in. While Zoysia does well in the sun, it can live in slightly cooler temperatures than Bermuda. It’s a slow grower, although it provides tight coverage and has good drought tolerance, both due to the grass’ dense root system of rhizomes and stolons. This makes it a good option for places, sunny or partially shady, that get a fair amount of foot traffic.

Colorado is known for its snowy mountain winters, while the plains of the east can get quite cool as well. For green lawn coverage during the coldest months, the main cool-season grasses will all do well in Colorado:

Kentucky Bluegrass is a top choice for cool-season cover in Colorado. It has a high tolerance to cold, and it can deal with the frost and snow that accompanies winter in the state. Bluegrass is a dense turfgrass that spreads across the yard with rhizomes, which contribute to thatch buildup that serves as insulation for the roots.

While bluegrass doesn’t do very well in drought and has high watering requirements, it’s a quick grower that will repair itself when damaged. This makes it a good choice for backyards and sports fields in winter. Kentucky bluegrass does best in full sun, but it will be quick to go dormant when the heat of summer arrives.

Fescue grasses, including fine fescue and tall fescue, do well in cool areas that have sandier soils or in loamy areas that drain well. Their deep roots make the fescue family a drought-tolerant grass, and fescue is loved for its hearty nature. It can deal with warmer temperatures better than other cool-season grasses, and it will stay longer into early summer. Most fescue grasses also have good shade tolerance.

Fescue is a bunch-type grass, and while some varieties grow in smaller bunches and create more even terrain than others, a regularly overseeded fescue lawn will give good ground cover throughout the cool seasons. Since this grass type doesn’t have rhizomes or stolons, it won’t spread to heal itself if damaged, and isn’t the best choice for a lawn that gets a lot of wear from use.

Perennial rye is another bunching grass that is a good cool-season ground cover. It’s a quick grower that, while it won’t spread to repair, will grow to fill in open spaces when overseeded. It’s often planted with Kentucky Bluegrass for a blended lawn that can tolerate some shade, some wear, and cold temperatures.

On its own, however, perennial rye can tolerate full sun, but not much foot traffic. It needs less water than Kentucky bluegrass, but like bluegrass, rye doesn’t handle heat or drought very well.

When Should I Plant Grass Seed In Colorado?

As a state in the cool planting zone of the US, Colorado is constrained by temperature fluctuations throughout the year. Warm season grass can be planted from mid spring to early summer to give it time to grow in be mature enough to deal with the heat of mid to late summer.

Cool season grass should be planted in early spring or early fall to mature before preparing for summer or winter dormancy.