Atrazine is a long-used and common herbicide that suppresses warm-season weeds in certain types of lawns. This weed killer gets rid of many broadleaf and grassy weeds while being safe for use on St Augustine and Centipede grass. It can be found as an active ingredient in many herbicide products, or it can be applied with a diluted concentrated formula.

The herbicide is commonly used in agriculture as well, particularly on corn and sorghum, both of which are grass crops. There is concern about the overapplication of this weed killer due to its quickness to be rinsed away in wet conditions, but when applied in correct amounts and in dry conditions, it’s an effective suppressant that helps desirable grass grow in without competition.

This herbicide is particularly used as a post-emergent, targeting weeds that have already shown up. However, Atrazine can also prevent some seeds from germinating later in the season. Similar to many pre-emergent formulas, Atrazine targets roots, and if a newly sprouting plant is starting to establish its roots, this formula can interfere with that plant’s development.

That being said, Atrazine has to be applied in dry conditions, and germinating seeds need a moist environment, so it shouldn’t be applied as exclusively a pre-emergent.

As a selective post-emergent, Atrazine is absorbed by the roots of certain plants, both broadleaf and grass, so, although it can suppress some seed growth, it’s intended for plants that have existing roots. By the time environmental conditions are dry enough to apply Atrazine, both weeds and grass should be established enough for the application to be effectively absorbed.

How Does Atrazine Work?

As a liquid formula intended to be absorbed by the roots of established plants, rather than by the leaves like other post-emergent herbicides, Atrazine is a systemic weed killer that works from the inside out.

The chemical formula stops photosynthesis in plants that it affects by preventing chloroplasts from producing chlorophyll. Without chlorophyll, the plant can’t make the sugars and starches that it needs to feed itself, and it dies off. Atrazine needs a few days to be absorbed and take effect, which is why it should be only applied in dry weather.

This herbicide is meant to be applied in dry conditions so that weeds will absorb the liquid when there isn’t much other moisture around. The dry ground also keeps the herbicide in the topsoil to be sure as much of it can be absorbed as possible, as it can easily be rinsed away with rain or watering.

What Kind Of Weeds Will Atrazine Kill?

When Should I Apply Atrazine? 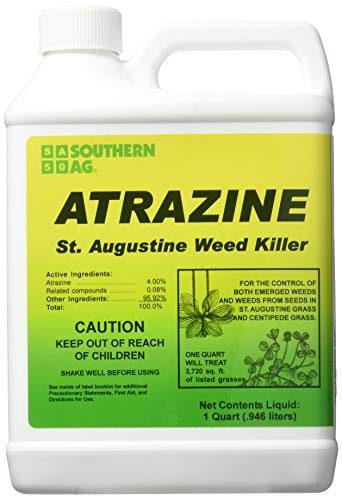 Atrazine should be applied after your Centipede or St Augustine lawn has grown in and is at its mature, summer-ready stage. If the herbicide is applied during the grass’ transition out of dormancy, it will slow down the revival since the formula targets roots. It won’t damage the grass otherwise as long as it’s applied following the directions on the product label.

Once the lawn is mature, the wetter part of the early spring season should be over, and the dry conditions in which Atrazine must be applied should provide you with a streak of several days without rain. When temperatures are between 75 and 90 degrees, you can apply Atrazine, but any hotter air can evaporate the liquid formula before it has time to be absorbed.

It should be allowed to remain dry for at least 3 or 4 days, and up to between 7 and 10 if possible. This is because Atrazine is very mobile when wet, and it can be drained down from the topsoil with just enough rain. It shouldn’t be watered in, but if there hasn’t been rain in up to 10 days, you’ll be able to give your lawn a watering and the Atrazine can be worked into the soil. This will provide some pre-emergent effect while it’s in the upper part of the ground until it’s rinsed away by the next rain or watering.

How To Apply Atrazine

Atrazine comes in both concentrated and premixed products. It’s an active ingredient in Spectracide Weed Stop, it’s sold in a concentrated form as Hi-Yield Atrazine Weed Killer, and can be found under other generic and brand products. In many states, a license is required to purchase concentrated forms and may be restricted to professional use.

When it is used, Atrazine can be mixed at 4 or less ounces per gallon of water to be applied with a backpack or pull sprayer. A marker dye is often added to track application since the solution is a clear or whitish color. A surfactant is frequently added as well to reduce surface tension of the water-based mixture and be extra-absorbent for the roots.

Atrazine is often applied with pre-emergent formulas like Prodiamine for all-sides control of weeds. It shouldn’t be applied more than once a season, and it doesn’t need to be applied every season. Like any herbicide that’s used too frequently, local weeds can become increasingly tolerant to it when constantly exposed. 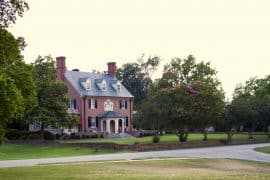 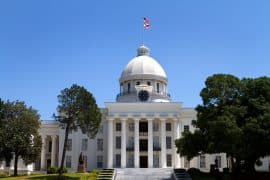 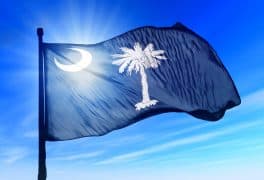