Zoysia is a robust turf grass that is loved for its low cut, dense coverage, and endurability. As a perennial plant, a yard full of Zoysia will last for several years, during which time it will go in and out of dormancy over the changing seasons. This warm-season grass goes dormant over fall and winter, but it can also slip into dormancy during the height of summer heat.

A lawn going dormant is normal, and it’s actually good for it to go through the annual growth-and-rest cycle. It’s still alive while dormant, and still needs to be given an inch of water about once a week when temperatures aren’t freezing.

Proper care of your Zoysia while it’s growing helps it best prepare to enter dormancy when the time comes, survive in a low-energy state during the strenuous cold weather, and revive and grow back as strong as ever.

Zoysia builds a dense, traffic tolerant ground cover: it has both rhizomes (below-ground root extensions) and stolons (above-ground root extensions) that contribute to extensive lateral growth. The grass collects thatch that protects the root system year-round, and the thatch that builds up over the warm months will insulate the roots during the colder periods of the year.

During the middle and end of summer, when temperatures are high and precipitation is low, the hot and dry conditions can prompt a Zoysia lawn to temporarily go dormant from the stress. This is part of the reason a lawn shouldn’t be fertilized with nitrogen in the middle of the summer: the hot temperatures are stressful as it is, and growth pushed by nitrogen can stress the grass further. If you want to green up your lawn mid-summer, an iron application will help with the color and control for growth.

When Zoysia is getting enough water in the summer, it should be able to tolerate even the warmest temperatures. Zoysia that dries out will enter dormancy in the highest heat of summer, but with some watering, it will green back up. This is in comparison to St Augustine, which will stay green longer, but once it goes brown, it has died.

When your Zoysia starts receiving water again, it should revive and regreen. If any areas stay brown, they likely went too long without water, and it may be a sign of low moisture from compacted soil in that part of the yard.

Zoysia loves sandy soil so it can reach its roots into the ground. Compacted soil or heavy clay soils don’t have enough space for Zoysia to move its roots around and may build up too much water at the surface level for zoysia to be comfortable. Well-drained, well-aerated soil is best to keep Zoysia happy and healthy with dry roots throughout the year.

What Does Zoysia Grass Look Like When It Goes Dormant?

Like all grasses, Zoysia looks like it’s dying when it goes dormant. Tan or brown coloration and strawy blades start to cover the yard as the roots sacrifice their foliage to enter a low-energy phase. Summer dormancy can be patchy, where some areas that stay more moist, like areas that get cooled by afternoon shadow, remain green while areas drying out in the sun fade away until they get more water or temperatures cool down again.

Winter dormancy, however, is a uniform event, where all of the Zoysia in your yard will turn brown. You can extend green coverage into the fall with a cool-season grass like fescue or rye,  but even in the warmest parts of the country, Zoysia will be at rest for a few months, and not at its greenest in the meantime.

Is Zoysia Dormant In Winter?

Zoysia will go dormant once temperatures are consistently below 60 degrees. During the end of summer, when daylight hours start to drop, the Zoysia lawn will grow more slowly as it begins to store energy in its roots rather than directing it to the blades.

The energy the grass made and stored at the end of summer will get the roots through fall and winter. In spring, when temperatures are above 60 regularly, the Zoysia will start receiving enough light without the threat of frost to start sprouting green blades again.

Should You Scalp Zoysia While It’s Dormant?

Zoysia is loved for its thick turf quality. With its deep roots, rhizomes, stolons, and layer of thatch, it is a sturdy grass. This layer of thatch helps insulate the roots over winter and protects them from foot traffic throughout the year. Scalping the lawn, or cutting it down to about a half inch in height, is a practice some grass keepers like to do in early spring. Due to the importance of thatch over winter, it should not be done in summer or fall. Dethatching is an integral part of spring scalping. 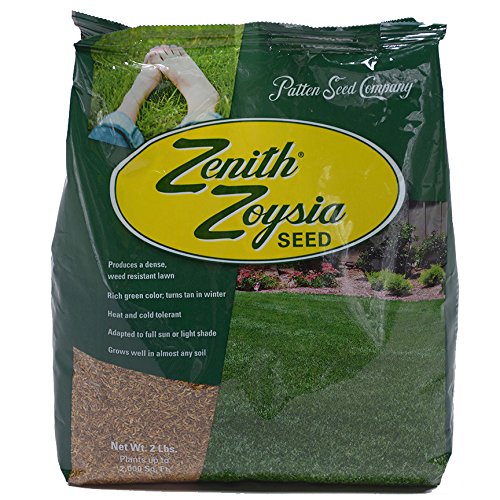 Dethatching and scalping should be done in early spring, right before the lawn comes out of dormancy. It’s also a good time to aerate, overseed, and fertilize to prepare the ground to grow in strong, with an abundance of moisture, nutrients, and airflow to encourage healthy roots.

If Zoysia is kept between an inch and a half in height during the warm months, it won’t over-develop a layer of thatch like some taller yards will. If that later gets too dense it may lead to moisture or pests taking hold at the humid soil surface during the cool, wet, dark months of fall and winter.

When measuring the height of grass and the depth of the thatch, be sure your measuring tape reaches the soil surface and that it isn’t resting on or in the grass canopy.

Some thatch is important, but too much can be damaging to the lawn. Not only can it create space for infection or infestation, but it may prevent water, fertilizers, and herbicides from reaching the ground level. An impermeable lawn will slowly be starved of nutrients and moisture and, rather than entering dormancy, it will turn brown and die off.